Agatha Christie: 100 Years of Poirot and Miss Marple was shown on C5 on October 10 at 8:30pm – still available to watch! – and is also on Britbox in the US.

I was a contributor talking about Agatha’s ten best books. Filmed it at home at the height of summer. Really enjoyable to do.

A labour of love essay from me about the great Agatha. Also had the huge pleasure of discussing it on the TLS podcast with Thea Lenarduzzi and Lucy Dallas

Today is Agatha’s 130th birthday and the festival – digital this year, of course – has gone live: https://www.iacf-uk.org/
I was interviewed by the totally brilliant @allaboutagatha podcast, huge fun to do…

I’m thrilled to say that The Last Landlady, memoir of my grandmother – and homage to the beleaguered, beloved institution of the pub – is published in the US on October 20th.
Here is a lovely early review from Kirkus, for which many thanks.

The lost ambience of local pubs is revealed in a warm homage to an indomitable spirit.

“She was the most confident woman I have ever known,” Thompson writes about her glamorous, independent grandmother, the longtime manager of an English pub. Besides offering a loving and vibrant portrait of a woman she “frankly deified,” Thompson examines the pub’s central role in the life of a community, before such venues became gastropubs and twee tourist destinations. “The proper pub,” she notes, “is about far more than having a good time. It accommodates the miserable, the misfits, those who are in their seats at curtain up, having nothing in their lives to make them late: from the moment of waking, they are waiting for the moment of opening.” Her grandmother presided over her motley clientele with toughness, courage, humor, and generosity. The daughter of a pub owner, by the time her father died, she was divorced, and as a single woman could not inherit the business that she knew she was more than capable of running. But the brewery for which she worked for a time granted her a publican’s license—the first, she claimed, for an Englishwoman who was neither a wife nor a widow—and she turned a decrepit country inn into a successful pub. Thompson spent much time there, working behind the bar when she was a teenager, listening to gossip, observing the vagaries of her grandmother’s customers. The pub, she writes, “was not the whole of my life, nothing like, but it was a backdrop that made me feel luckier” than her classmates who were cloistered in their homes for holidays. “I couldn’t actually imagine Christmas in a private house.” Any pub’s landlady, Thompson writes, has to be “part mother, part nanny, part sorceress, part goddess.” Her grandmother fulfilled those roles with panache: “the supreme landlady, with all that was best in the breed writ large upon her.”

A delightful memoir of a fearless and determined woman.

This brilliant festival has gone digital this year, and I appear twice in very distinguished company

Thanks to the wonderful Victoria Dawson, I LOVED doing these interviews….

Thank you, Amit, for this truly wonderful piece

Thank you to Barry Forshaw for his lovely words

Absolute joy to do the Backlisted podcast (***** in the Times) with Erica Wagner, John Mitchinson and Andy Miller. Book of choice was Antonia White’s Frost in May but lots of chat about the three sequel novels plus Antonia’s somewhat problematical life… Producer Nicky Birch does a truly amazing job with four talking Zoomers

Thank you to Amit Roy for this lovely elegant piece 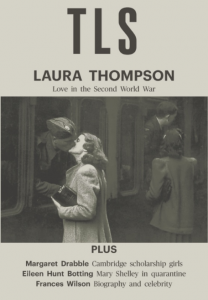